3 Facts About the Luna Brothers

It is quite disappointing that some of those who watched Heneral Luna had more than one question left in mind –“Why was Apolinario Mabini seated in the entire film?” and “Why did the film directors depicted Luna as a general when he was a painter?” – Questions suggesting that some have been skipping their History classes or have forgotten to read books.

These questions also signify the dire need of historical movies and biopic in this period when kids spend most of their time playing video games and watching television series. These movies can, at least, give them bits and pieces of historical lessons they can refer to when their kids ask the WH questions in Philippine History in the future.

Going back: articles have been written to answer the first question, –“Why was Apolinario Mabini seated in the entire film?” The confusion on the Luna Brothers is also becoming a subject of memes and sarcasm in the social media. That is why we’ve written the differences and similarities of the Luna Brothers… just so you know.

1. The Luna Brothers are both members of the Propaganda Movement 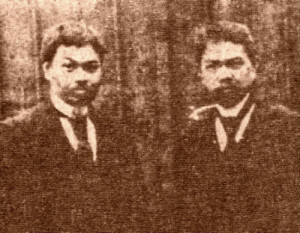 Their affiliation is, perhaps, the reason why people confuse Antonio to be Juan and Juan to be Antonio.

While studying Pharmacy in Spain, Antonio along with Jose Rizal formed the Los Indios Bravos, a brotherhood which aimed to support the Filipino culture, arts, and sports in Europe. Then he joined the Propaganda Movement. He was a writer of La Solidaridad, who cloaked his identity under the nom de plume ‘Taga-Ilog.’ After La Solidaridad, Antonio organized the Masonry and Became a Master Mason. Then he ordered Pedro Serrano Laktaw “to organize Masonic Lodges in the Philippines and strengthen the Propaganda Movement”. Antonio later became the Chief of War Operations when Aguinaldo established a military government.

Los Indios Bravos was formed in the art studio of Juan Luna, who was also a good friend of Rizal. And just like Antonio, he became an active member of the Propaganda Movement. After his brother was appointed Chief of War Operations, he was asked to design the uniforms (rayadillo) for the Philippine Army. In addition, Juan was part of the delegation in charged for the international recognition of the Philippine Republic.