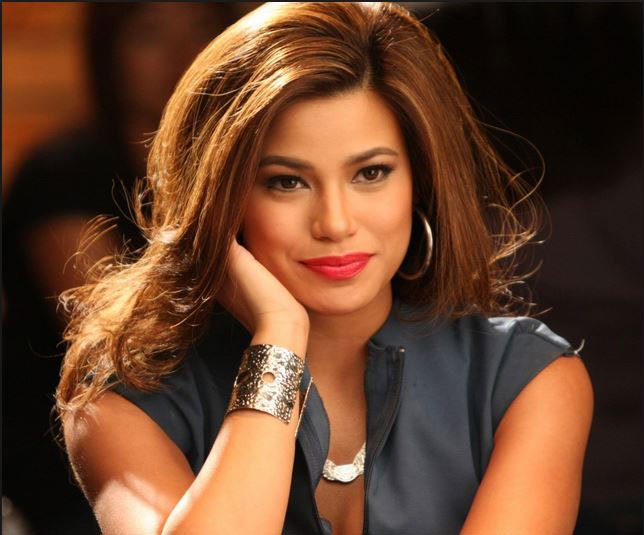 Denise is from the Laurel clan, a politically loaded clan. Her late grandfather Salvador Laurel was the Vice President during Corazon Aquino’s presidency and her late great grandfather Jose Laurel was the third president of the Philippines. Her uncle Cocoy was a matinee idol in his time, even being paired with Nora Aunor in a movie. Fashion designer Rajo Laurel is also a cousin of hers.

Laurel was discovered by Star Magic’s big boss Mr. M (Johnny Manahan) in a play of Repertory Philippines. Luckily, she was given a break to be part of Ang TV 2, then she played as Ina Raymundo’s daughter in Pangako Sa ‘Yo.

She then made a name in Singapore when she was fortunate to be part of MTV Asia’s Rouge, which was shown all over Asia. Among the many who auditioned, she stood out and got the role of a smart lead vocalist named Pat. At the age of 16, her experience in working with other nationalities has taught her things that helped her improve her craft. After a season in Rouge, Denise decided to concentrate on her local showbiz career.

In her return to the Philippines, she was part of the teen-oriented show Click, TAPE Inc.’s Walang Hanggan and Leya, and two telefantasyas Mulawin and Encantadia.

She went back to ABS-CBN. Laurel was starred on Abt Ur Luv, and in the fifth season of Komiks, where she plays an Engkantao. In 2008, ABS-CBN started the Precious Hearts Romances Presents series in which Laurel is prominently featured. Thus far, she has starred in four of the series’ adaptation: Bud Brothers, You’re Mine, Only Mine, Midnight Phantom and Kristine. She started getting recognition when she did the series, most notably in Midnight Phantom and Kristine opposite her good friend Rafael Rosell. Her team-up with Rosell has been a hit with the viewers, thus they were teamed up again in Dahil Sa Pag-ibig. After Dahil Sa Pag-ibig, Laurel starred on her fifth PHR series entitled Pintada, where she played a teacher with a mysterious past.

In 2013, Laurel played an antagonist role in the last PHR series Paraiso, and later became part of the pre-primetime family drama series Annaliza that was aired until March 2014 who portrays Isabel. She is set to star in the afternoon melodrama series Nasaan Ka Nang Kailangan Kita in 2015. The said series will replace Faith in the first quarter of the year on primetime.