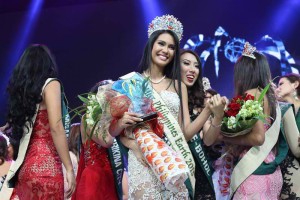 Beauty is an inspiration to all. This year’s Miss Philippines earth does just that. Beautiful women from all over the Philippines compete to be crowned queen and to lead us to take better care of our environment.

That’s what Angelia Gabrena Ong of Manila, the crowned Miss Philippines Earth 2015 is showing us. She said she wants to be remembered as “a queen who really did her job.”  She also said that she plans to study more because “Ms. Earth is not all about beauty.” She wants to fight for her advocacy about restoration, reforestation and minimizing our carbon footprint through ecotourism. According to her, although glitz and glamour will always be there but during her reign she wants to be remembered that as proactive. She also wants to be queen who was able to implement real projects and was able to inspire a lot of people to take care of the environment.” Her ideology makes her more deserving for her title, I guess.

Miss Angelia Gabrena Ong, a woman with strong advocacy that says “We will, because we can”, was crowned Miss Philippines Earth 2015. She is a working student from the city of Manila, studying Marketing Management at College of St. Benilde. The 24-year old Marketing Management student was also adjudged as Ms. Hana Shampoo. She previously finished second runner-up at Ms. Manila beauty pageant in 2014 and was awarded the People’s Choice in Binibining Pilipinas 2011.

She beat 37 other hopefuls from across the country and Ong accepted her sash and crown from the reigning beauty queen Ms. Earth 2014 Jamie Herrell. Aside from winning the competition, during the activities before the coronation night, Angelia led the resorts wear contest and the Darling of the Press poll. She also placed third in the swimsuit, casual wear and Trash to Class competitions. Now, her beauty that charmed the audience will represent the Philippines in the international Miss Earth competition later this year.

After besting among others Angelia said, “I think this [victory] is really a validation that indeed if you have faith [God] and if you claim it you’ll have it.  “Ms. Philippines Earth this year is really a roller coaster ride for me. It actually gave me a different kind of confidence”, she added. In those passages, Miss Angelia Gabrena Ong is telling everyone to have faith in God and also help ourselves to gain confidence.  She’s a good example of beauty queen who has the desire to stand on her title and prove that it’s not just about beauty but more on being advocator for change.