Chiz and Heart’s Renewing of Vow, This Time Hopefully with their Parents

The approval of parents to a child’s wedding is very important. Your parents are the ones you are expecting to be there at your very special moment. It would be incomplete if they object to see you in your wedding dress.

That was the feeling of actress Heart Evangelista during her wedding day with Sen. Chiz Escudero. Her parents are not present at their wedding. The reason behind is her parent’s disapproval for Chiz Escudero to be her husband.

As remembered, on March 19, 2013 , the parents of Heart — Cecile and Rey Ongpauco — faced the media to publicly disclose their disapproval of the senator. The Ongpaucos accused Escudero of being an “alcoholic,” calling him “arrogant” and accusing him of manipulating their daughter to go against them. They added, Escudero told Heart he would be president in 2016 and she would be his first lady. They are asking Chiz to leave their child- through the media-to leave their child alone. Heart, 28 years old during that time , has defended her 44-year-old boyfriend. She says that she is old enough to make her own decisions even as she thanked Escudero and his family for showing their love. Heart has also appealed to political players to not use this against Escudero in the campaign because midterm election that time is approaching.

On Thursday, March 21, Escudero broke his silence regarding the issues that has been thrown against him by the parents of his girlfriend-actress Heart Evangelista. “I didn’t want to talk and have wanted to keep my private life separate from my public life, but my kids and my mother are already getting affected,” he said. “What Heart’s parents are doing is just not right.” 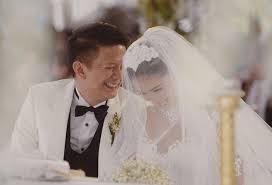 Escudero admitted her parents were right that he is not as wealthy as they are and could probably not provide for her financially. But he said “this is not a license to belittle me.” Escudero clear out that all Heart’s parents said about him are untrue and saying that he has never disrespected them in any way. He pointed out that the reason why Heart’s parents criticize him because they wanted to separate them.

Despite the controversies and disapproval of Heart’s parents, Chiz and Heart still pursued their wedding. On 15 February 2015, Evangelista and Escudero wed at the Balesin Island Club in the Philippines. Still, the parents of the bride didn’t attend on that very special occasion. It becomes harder for her parents to see him in her wedding dress. Though her parents did not attend the wedding they still give their blessing and Heart understands it.

Last month, the actress started posting  photos of her  parents  visiting  her at their residence  in  Quezon City.  That was the first time that Escudero said he and his in-laws talked with each other. According to Chiz they didn’t talk big issues, it’s just a normal encounter and ends up well.

Now, just four months after their wedding, the couple are already planning to renew their vows next year, but hopefully this time, with the actress’ parents. According to Chiz it will not be a full blown wedding they’re just renew their vows. He said it would be a simple occasion that would be held possibly in their house in Quezon City.

Indeed, after years of controversies, the couple had surpass all the issues and strongly fought for their love. It may be the beginning of their happy family knowing that Heart’s parents accepts the romantic marriage of their daughter Heart with Senator Francis “Chiz” Escudero.