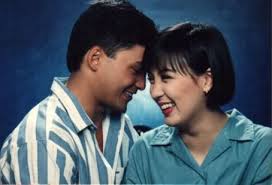 Another reel to real loveteam is the GabRon tandem! Their on-screen chemistry has not only captured the hearts of the viewers but has also captured theirs. It was a love that blossomed from scripts and lines in the movies. They have carried and internalized their characters so well that they ended up marrying each other in 1984. Since they were both young then, they never thought of those petty fights, incompatibilities, and other arguments. These have caused them to split up. She said that the man she saw on the TV, her dream man is far from the image of Gabby. Even if their marriage is short lived, one KC was born out of it. Today, they are living their lives separately; Sharon with a Senator and Gabby with a private person. 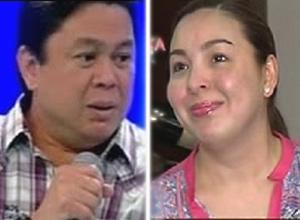 Another kilig loveteam of the 90s, is Dennis-Marjorie tandem. Their relationship has proven that pretty girls usually fall for the funny boys. It was in 1997 when the two decided to finally tie the knot. It was sailing smoothly, and everything was okay until their tenth year. Their 10 year partnership has gave birth to three beautiful daughters. It was in 2007 when they finally split up and it was in 2009 when the judgment became official. The split up, according to Marjorie was because she simply wanted out of the relationship. No more explanations.