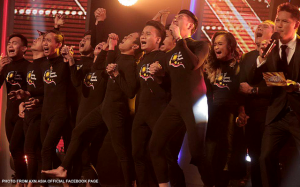 The secret to winning is by putting your heart into what you are doing. It is by giving your best with love and passion. Furthermore, Filipinos are rarely emotional and could easily cope up with the situation and could catch the feelings of others by relating their emotions. So, in some way or another we have the power to influence others, by showcasing our talents.

Truly, Filipinos got talents that can be showcased throughout the world. Just like what El Gamma Penumbra did, this Pinoy group from Tanauan, Batangas took to the stage at Marina Bay Sands in Singapore for the Asian’s Got Talent Competition. They beat out three fellow Filipino contestants and five others from Singapore, Thailand, Mongolia, China and Japan. El Gamma Penumbra earned $100,000 and got the opportunity to perform regularly at the Marina Bay Sands in Singapore. In addition, budget airline Jetstar added US$10,000 worth of flights to its network of 60 destinations across 16 countries in Asia, which were shared between the top two acts. The winner was determined by public vote, where audience members and viewers at home in Asia can vote via SMS, Facebook, or on the show’s official app.

Through their extraordinary shadow play performance during  finals of Asia’s Got Talent, one of the judges brought to tears because of the heartfelt message regarding the love for environment. Their touching tribute to Mother Nature made the judges emotional and realizes that  they, as entertainers must make their works noble. As Taiwanese-American pop idol Vanness Wu rounded up the comments for the Filipinos, adding: “We as entertainers have a responsibility because when we say something, people will actually listen. And you guys are a great, great example of that”. Indonesian rock icon Anggun, also said; “Tonight you raised awareness on how important mother nature and animals are more than ever. Our job as entertainers, we are here to entertain people, but if you can — if we can raise — awareness on subjects that really, really matter, then that makes our jobs more noble”.  It shows that Filipinos set as an example not just for fellow Filipinos but also for other races and even to the ones with big names in showbiz.

Their passion to show their talents on national television doesn’t  just  bring pride for the country but also it serves as an inspiration to everyone in the whole world. As the four Filipino acts said  that all they wanted is to bring pride to the country and show the world how talented Filipinos are. They prove it right by winning the Asia’s Got Talent Competition with their shadow play final performance, featuring the song “Colors of the Wind” from Pocahontas. Through their performance they showed the sincere love for nature, showing that our Mother Nature is on its critical stage and we need do something about it. The El Gamma Penumbra performance awakens the soul of every mankind to paid tribute to the Mother Nature and be aware the true conditions of the earth. Specifically they tackled in their winning piece several global issues such as illegal poaching, dynamite fishing, super typhoons and the rising flood levels.

El Gamma Penumbra’s style catches the heart of the viewers because they also gave their heart on their heart warming performances. It  is equipped with love for Mother Nature and love for  mankind  while unconsciously letting people be aware of the unity that comes after every calamity. Hopefully, their advocacies regarding global issues may continue through their shadow plays.