In the Philippines, for one to do good and stay in the showbiz industry, he or she must be able to maintain a very good-looking physical appearance and a very amazing talents. It is a tough world out there – if you lose the ‘k’ or the wit to do things, you will easily be set aside. However, the face is not always the stepping stone to be in the industry; some just entered it through pure talent. It is their talent that bring them in, and it is their face, their physical appearance that will make them stay in the industry. There has been a saying that ‘being an artista, make someone look better’. To prove that claim, here’s a list of beautiful transformations which some local Philippine celebrities have undergone! 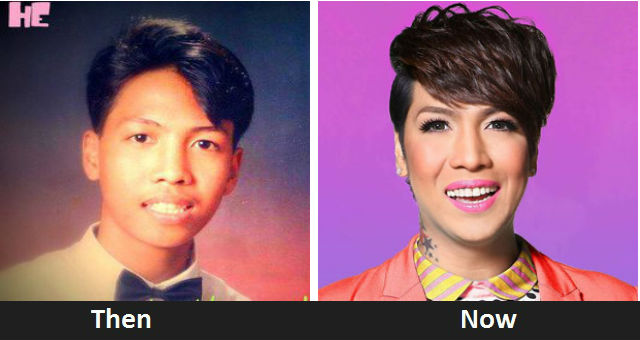 Probably the most famous comedian now in the country and the most ‘unkabogable’ gay as well, is none other than vice Ganda. He started his career in the late 2000s as a host in the hit noontime show, It’s showtime. Because of his natural talent of making funny and trendy jokes, he instantly became a regular on the show. Since then, he has been very open to the public about his life narrative – how he managed to overcome poverty little by little. His story is like the rags-to-riches story of most artists today. He used to sell things across the streets and do some ‘rakets’ just to provide for his family. All of it changed when he became a regular in the noontime show. But, aside from his financial status, his physical appearance has also changed to a very large extent. The stressed-looking Vice was gone and was replaced by the fresh and young-looking Vice. Indeed, fame can really make someone look better.