Okay, honestly, there are just two kind of salt I know, rock salt and iodized salt. Well, what a loser I am. There are in fact many varieties of salt — Hawaiian black lava, Himalayan pink, Bolivian rose, Peruvian pink mountain spring. There are many other varieties sold in markets.

Sea salts and other finishing salts have grown popular among chefs and foodies, who use them to add interesting flavor notes and a pop of color to dishes. They offer more complexity than standard table salt, which is processed to remove minerals and other harmless impurities, giving the salt its bright white color and uniform texture.

But how true is this?

Well, these claims are not supported by science. Our belief that natural mean better for you is not always true. From the health perspective, salt is salt, and eating too much of it in any form can increase the risk for high blood pressure and other downstream health problems.

Also, salt isn’t a good source of minerals like calcium, magnesium, and potassium. Salt contain an insignificant amount  of these minerals. Relying on salt as a mineral source is equivalent to eating white pasta to boost your fiber intake or guzzling honey to get more magnesium and iron in your diet — it’s just not efficient, nor is it health-promoting.

Marketers say unrefined or natural sea salt are of higher nutritional value than refined salt. They claim that when salt is refined from their whole form, there is a substantial loss in nutritional value. Well, science hate break it to you dude, there isn’t any meaningful source of nutrients in salt to begin with (it’s just sodium and chloride).

The same goes for unrefined sugars like evaporated cane juice and date sugar. The discourse about salt should not be about whether sea salt is healthier or not but rather: that people need to eat less of these ingredients. While health authorities still disagree about optimal sodium intake for adults and how low recommendations should go, it’s clear that we are currently consuming too much.

Whether you prefer regular table salt, kosher, or fancier varieties, it’s important to use salt sparingly. 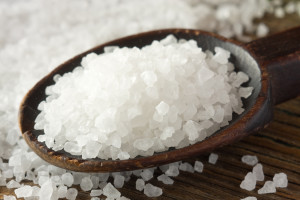 It’s all about iodine.

Okay, these varieties of salt only differ in what we call iodine content, otherwise, nothing much.

Standard table salt (the iodized-salt I was talking about) is voluntarily fortified with iodine, a mineral that’s essential for normal thyroid function (a quarter teaspoon supplies about 50 percent of the 150 micrograms adults need daily).

Other varieties, including kosher and sea salts, are not fortified and therefore supply no iodine. The vast majority of salt used in processed foods also has no added iodine. Iodized salt isn’t the only source of the nutrient, however. Fish and shellfish, dairy products, bread and other grain products, and eggs supply iodine as well.

Women who are pregnant or breastfeeding need extra iodine (220 and 290 micrograms, respectively), and approximately one-third of pregnant women in the United States are marginally deficient. Iodine is critical for babies’ growth and cognitive development, so it’s important to get enough.

The American Thyroid Association recommends that women who are pregnant, breastfeeding, or planning to become pregnant take a prenatal vitamin that includes 150 micrograms of iodine in the form of potassium iodide. If you are currently taking a prenatal supplement, review the label to determine if it contains iodine, because some formulations still do not.

As a group, strict vegans appear to have lower iodine levels compared to vegetarians and omnivores because many of the richest sources are of animal origin. One good plant-based option is seaweed, which can be consumed in sushi rolls, salads, or even the crunchy baked snacks that are now sold by some mainstream companies. Seaweed can be highly concentrated in iodine, but the amount is variable among different types, and you need to eat it consistently, several times a week, for it to be a significant source. Consuming excessive amounts can provide too much of the mineral, so it’s important not to go to extremes.
Unfortunately, there is no reliable way to assess an individual’s iodine level, so if you’re concerned, it’s best to work with a registered dietitian or well-informed physician to determine if you might benefit from a supplement. For individuals who may have a low iodine intake, using iodized salt in place of other varieties when cooking is a good idea, but it’s not a reason to sprinkle on more salt.