Mandatory Repatriation of Filipinos in Iraq 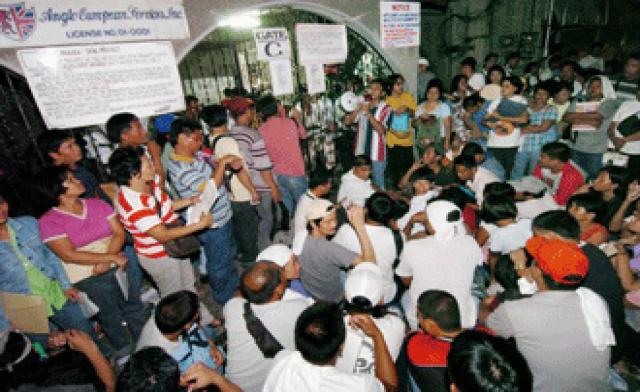 Filipinos Applying for Jobs in Iraq
photo courtesy of www.alarabiya.net

Going overseas is like sentencing oneself into exile to an intimidating land. With no help from friends around, one will need to deal with unfamiliar language, weather and food. But now times have changed, many overseas Filipino communities have thrived all over the world. Cultural programs, tours of Filipino entertainers have brought the overseas Filipino workers closer to home. They prefer to go abroad to secure their future and walk for a better life.

Leaving the country means detachment from family members and long distance calls and instant messaging conversations as primary means of communication. It also means depriving oneself of the joy of being with your loved ones or watching the children grow.  In spite of all sacrifices, there still a lot of Filipinos who choose to work there, fighting for the financial shortage experienced by most. Whether it’s their first choice or just forced to do so, there are many l reasons behind such OFW phenomenon like unstable economic situation, high unemployment rate, low salary offered by local companies, contractual employment arrangement, and poor benefits for workers in the Philippines in the Philippines.

From all countries in the whole world, Iraq is one of the countries which have many Filipino workers. But Iraq is one of the petrified countries for all Filipinos because of the harshness of some employer there. Therefore, the Philippines is assessing the situation in Iraq to look at the possibility of raising the crisis alert level to four, the highest, which entails mandatory repatriation of Filipinos there. “Give us five days because we are looking at it very closely,” Department of Foreign Affairs (DFA) previously raised crisis alert level 3 in the country due to the insurgency that has been growing out of control and threatening the capital city of Baghdad.

The rebel group, led by Islamic State in Iraq and the Levant (ISIL), has made significant advances on towns around Baghdad, alarming the United States which deployed 275 soldiers to protect the US Embassy.

The majority of the 900 Filipinos in Iraq are located in the autonomous region of Kurdistan in the northern region of the country. So the DFA need to make sure have a mapping of people outside Kurdistan. They have deployed a rapid response team to Iraq to ensure the safety and security of Filipinos

However, over a thousand Filipinos are still in Iraq despite the call of the Philippine government for a mandatory repatriation following the attacks on two hotels there last week.

“Jenny”, not her real name, has been working in Baghdad for about three years. The car bombing attacks last Friday was just near her employer’s home. But Jenny said they are used to it already.
She added that it’s hard to live in the Philippines because of the unstable economic situation here in our country and it is not applicable for her for having children need to take school in college. But she concluded that it’s too hard to work abroad because it’s not easy to find a good employer. Those who wants to come home but just can’t because their passports are with their employers. The Philippine government raised alert level 4, which calls for a mandatory repatriation of Filipinos in Iraq, aside from Kurdistan region, because the car bombing attacks. Charge DFA Elmer Cato urged remaining Filipinos in Iraq to evacuate before the situation worsens. For those who have no plans of leaving Baghdad, Cato urged them to register with the embassy. Meanwhile, alert level 2 is still in place in Kurdistan where an estimated one thousand Filipinos are based.

The ongoing conflict in Iraq and the Philippine government’s announcement of mandatory repatriation are not enough to convince more Filipinos to leave the country. So far, only two Filipinos from the Green Zone in Baghdad have signified their intention to be repatriated. In Kurdistan, Filipinos there remain calm despite the DFA’s hoisting of Alert Level 2 last Monday. The region is host to an estimated 800 Filipinos. The Department of Foreign Affairs reminded Filipinos there to restrict non-essential movements, avoid public places, and take extra precaution. For Filipinos in Kurdistan, they continue to live their normal lives. Dennifer Espiritu said their family back home has nothing to worry about. Meanwhile in Kuwait, the Philippine Embassy, together with ABS-CBN Middle East, visited the Kuwait-Iraq border. The embassy likewise met with the Kuwait Ministry of Foreign Affairs should Filipinos in Iraq need to be transferred to Kuwait.

For the purpose of earning more or securing better future OFW phenomenon brings to our country and to the next generation of Filipinos a complicated situation. The road ahead may be dark and we don’t know what’s in store, but at the moment, while we are still physically able, we do our best to protect ourselves and to help our country.