After of a very controversial issue of her and her fiancé’s mother, Paolinne Michelle “Mich” Liggayu officially enters showbiz. Mich Liggayu is launched as one of the stars of TV 5’s newest series (from wattpad novels).  In this new project with TV5, she plays Monique, who becomes involved in a love triangle with two brothers played by Vin Abrenica and Martin Escudero. 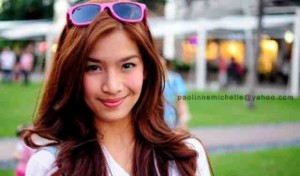 The death of his fiancé’ gives her lot of exposure. Netizens got mixed reactions when a video of her singing in the ICU where the late Jam Sebastian (the other half of popular youtube couple “Jamich”) confined. The video shows the side of the apparent insensitivity of Mich Liggayu, to which she said she did because of Jam. Singing is one of the things they mostly do especially Mich to encourage Jam to fight and smile.

Another controversy exposed that brought hate and bashed to Mich when a picture of her with Neo Domingo was all over social media. Singer Neo Domingo was the alleged new boyfriend of Mich Liggayu. This issue was exposed even before Jam died. It was confirmed by Maricar (mother of Jam), though. As expected Mich denied it all but it cannot change netizens thoughts for most of them believe Mich was truly cheating on Jam. On an interview Mich says that it’s not her fault to find a new love, a new source of love. A statement of her also emphasized that she loved Jam but it’s already over.  Her statement supported by Neo Domingo post on his Facebook account and later denied. Neo Domingo is Jamich friend and also a cast of their short film classmate.

But the most controverting off all issue was when Maricar Sebastian finally broke her silence.  Mich was accused by Maricar for keeping her son’s share of the funds earned by the “Jamich” from their Youtube channels. The grieving mother once said in an interview: “I want a breakdown of finances of my son. I am not a stage mother and I did not even get a single cent from him because we have our own lives. This time, since my son died, I now have the right (to his share)”. Maricar aired her anger when Mich log out her son’s account on his phone totally cutting them of to his son’s account where they earned money and some of his son’s belongings were missing at his condominium. Maricar also stressed out that Mich wasn’t always at his son’s side during of his battle but at her friend’s and Mich is very greedy for keeping was supposed to be Jam’s. Mich’s mom said on the contrary that everything that Jam’s owned especially concerning the money was all given to Mich but strongly doubt by Maricar because his son didn’t say anything about it. After the burial of Jam, Maricar and Mich didn’t talk nor see each other again.

2 months after Jam died. Mich decided to carry on her life by entering the entertainment world. The series she’ll play will air over a week, from May 25 to 29.

It seems like Mich Liggayu has a new method of “Moving on”. Was she supposed to mourn? Maybe yes, but not likely.