Pacquiao, Mayweather, go at it again 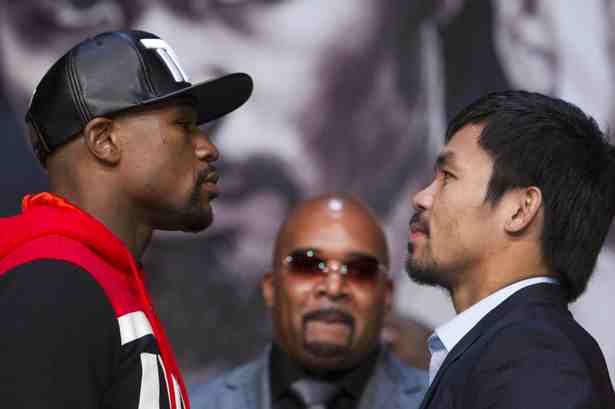 Manny Pacquiao and Floyd Mayweather Jr. finally stepped into the ring two months ago and fulfilled the long-time dream of boxing fans. Mayweather defeated Pacquiao via unanimous decision in a bout that’s been considered as the fight of the century.

Days after the fight, Pacquiao revealed that he suffered a shoulder injury during his training days and that he wasn’t 100% when he faced Mayweather Jr. This confession by the Filipino boxing icon created a buzz on the internet, but it died quickly. No rematch was made, and both fighters seem to have moved on after their bout, and years of taking verbal jabs at one another.

Well, at least that’s what most of us thought.

A couple of days ago, Mayweather posted a short video on Instagram, which featured him talking to a training dummy he called ‘Manny’. The undefeated American boxer’s ‘conversation’ with the dummy was about the issues surrounding Pacquiao’s shoulder injury.

The video started with Mayweather saying the following;

“So Manny, you out here tellln’ people that I didn’t win fair and square, that this little arm is messed up. Is that right? Huh? Talk to me.”

Then he slapped the dummy twice while saying “Stop lying. Stop lying.”

Mayweather placed caption on his video that says “I love having fun, joking and living life #senseofhumor.”

The video immediately went viral, entertaining thousands of Mayweather fans and infuriating thousands more of his haters. It apparently reached Manny Pacquiao’s attention, and the humble Pinoy boxer had an emphatic response.

Pacquiao’s public information officer, Aqui Zonio released the statement of the eight division world champion. It had an inspiring start, with Pacquiao defining a “Champion” as someone who should be “gracious” in his words and deeds not only in his chosen profession, but also in his family and life outside of his field.

Then, he followed it up by saying that the reason why Mayweather is behaving badly both on and off the ring is because “He hailed from a family of ex-convicts, and that he himself is an ex-convict.”

It is clear that Pacquiao took Mayweather’s IG video personally by reminding him. about his criminal records which can be traced back to thirteen years ago.

Mayweather was convicted of two counts of domestic violence and one count of misdemeanor battery for repeatedly punching Melissa Brim, the mother of his daughter, multiple times. Several misdemeanor and felony battery charges would then be filed in the following years, as if Mayweather can’t stop punching random civilians. However, most of these charges were dropped after a series of court trials.

Despite Pacquiao’s personal digs on his one-time opponent, his statement still looked and sounded polite, The Filipino boxer didn’t really intend to retaliate, but he wanted to remind Mayweather how a world champion should behave.

Pacquiao and Mayweather have been going at it for years, even before they fought two months ago, with the latter doing most of the trash talking. They temporarily stopped when they were able to seal the deal on their mega fight, but here they are again.

However, since no rematch has been made, at least for now, it would be better for Pacquiao to just let Mayweather talk. After all, he wouldn’t gain anything just by exchanging insults with the American boxer. It’s a complete waste of time. Filipinos will always love and respect him win or lose. So he should just focus his energy doing the right things, especially his job as a Congressman.

What can you say about Pacquiao and Mayweather’s ongoing verbal war? Post it in the comments section below.