She thinks the apples she bought were injected with HIV, could she be correct?

Recently, a photo that was posted by a woman named Vienly Jane Cuaresma Noch went viral. In the photo, she is warning everyone not to buy fruits in the side-walks as these fruits may be injected with blood carrying human immunodeficiency virus or HIV. 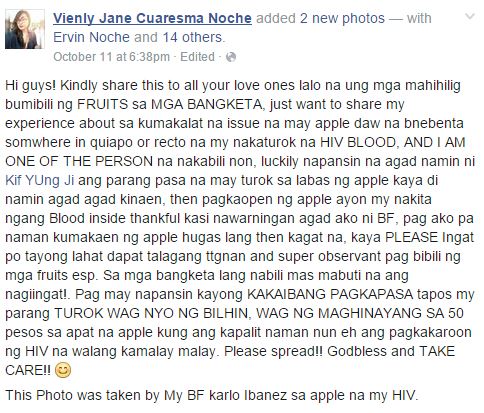 The apples that she bought from the side-walk vendor in Recto had a bruise and when they cut it into half, they saw the red discoloration. 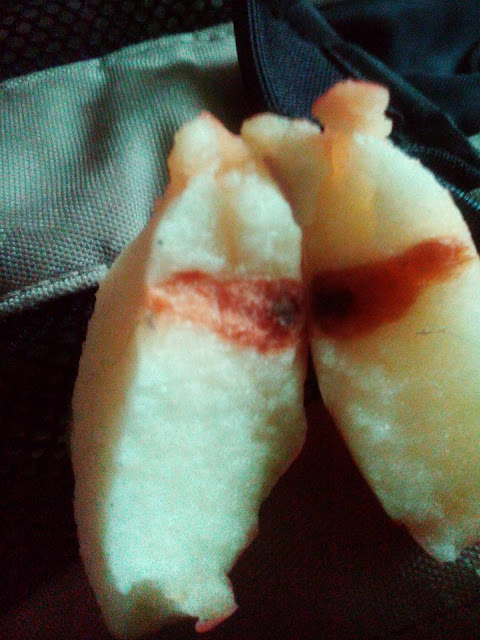 They claim that it was a blood stain carrying HIV. But that is completely inaccurate.

HIV is spread from an infected person to another person through direct contact with some of the body’s fluids. It is not spread easily. Only certain body fluids from an HIV-infected person can transmit HIV:

These body fluids must come into contact with a mucous membrane or damaged tissue or be directly injected into your bloodstream (by a needle or syringe) for transmission to possibly occur. Mucous membranes are the soft, moist areas just inside the openings to your body. They can be found inside the rectum, the vagina or the opening of the penis, and the mouth.

In the United States, HIV is spread mainly by:

Less commonly, HIV may be spread by:

HIV is NOT spread by:

HIV is not spread through the air and it does not live long outside the human body. People with HIV who are using antiretroviral therapy (ART) consistently and who have achieved viral suppression (having the virus reduced to an undetectable level in the body) are very unlikely to transmit the virus to their uninfected partners. However, there is still some risk of transmission, so even with an undetectable viral load, people with HIV should continue to take steps to reduce HIV transmission.

HIV may cause acquired immunodeficiency syndrome or AIDS.