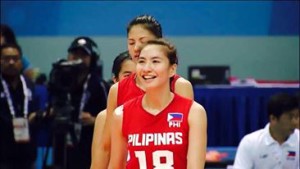 The Philippine Women’s Volleyball team may have had an early exit in the 28th SEA Games in Singapore, but one of them will probably last longer in the eyes and hearts of the fans and spectators of the sporting event; and it is not Alyssa Valdez.

Rachel Anne Daquis, who is already a head turner here in the Philippines, was also one of the most popular and sought after volleybelles in this year’s South East Asian Games. The gorgeous 27 year-old Filipina athlete was often chased by the SEAG media for interviews and pictures. In addition, Daquis was also part of the billboards in the Singapore Sports Hub, the venue where most of the games are being played. 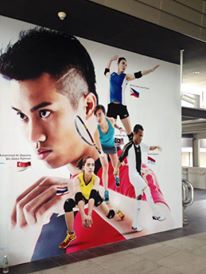 But Daquis’ popularity overseas did not end with billboard appearances or fan and media interactions off the court. She was also one of the reasons why volleyball aficionados, both local and foreign, cheered for the Philippines during their short-lived, three-game SEAG campaign. The national team exited the tournament with a 1-2 record, losing to powerhouses Thailand and Vietnam while beating lowly Malaysia for their lone win. But despite the national team’s shortcomings, fans are left with something to remember about Philippine volleyball; Rachel Anne Daquis, her game, her passion, and her heart for the sport and for the country. 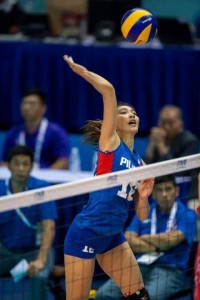 Rachel Anne Daquis is one of the most popular and talented volleyball players in the Philippines. She’s been considered as the face of Philippine volleyball scene for years. She’s been a champion in the collegiate and amateur ranks. By now, it seems that Daquis has achieved everything that a volleybelle could ever dream of. But believe it or not, this is her debut in the South East Asian Games. Daquis describes the feeling as perfect and she says she’s very much honored to be a part of the team that made its return to the international scene.

The Philippine Women’s Volleyball team was absent from the biannual sporting event for the last 10 years. The last time the national team was part of SEA Games was when it was held in the Philippines in 2005. The team that participated in that year’s spectacle finished with a bronze medal. Back then, Daquis was still a second year student of Far Eastern University and volleyball wasn’t too popular, not even relevant.

Before Rachel became a volleyball player, nobody seemed to care much about the sport. Volleyball games in the collegiate had no television coverage and the number of spectators can be easily counted. Very few people were asking the players for pictures and autographs, and they were not treated as celebrities either. Amateur leagues also struggled to gain exposure that time.

Daquis was one of the reasons why things changed gradually for volleyball. The one-time FHM covergirl did not just make herself a sensation through it, but she also brought volleyball to where it is right now in terms of prominence. There is no denying that volleyball has become a nationwide phenomenon. Games from the collegiate and amateur ranks are now being held in large arenas and are jam-packed with die-hard fans. The media has treated the athletes like celebrities and the sport’s popularity is now constantly contending with basketball.

The Philippine Women’s Volleyball squad rode that ten-year momentum to the 28th SEA Games. They may have failed to meet the expectations, but they can be proud of what they have achieved, no doubt.

So what’s next for the national team now that the SEA Games are over for them? National team coach Roger Gorayeb hopes that this team would remain intact until the next SEA Games. It was evident during their losses that they have not played together for a long time. So it would be great if this team will keep the band together and build on their promising start.

As for Daquis and the rest of the Pinay balibolistas, no one knows what they will do next as individual players. But one thing is for sure; with Daquis and her successors Alyssa Valdez, Dindin Manabat, Jaja Santiago, and Abbty Marano leading the way for Philippine volleyball, the future looks bright. 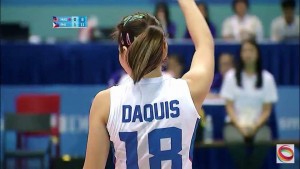