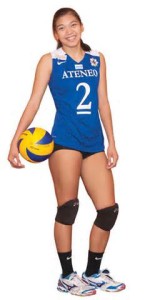 Alyssa Valdez, one of the most popular players in Philippine volleyball, will lead the 12-woman lineup that will represent the Philippines in their return to the volleyball tournament of the Southeast Asian Games on June 10. One of Valdez’s other assignments in Singapore, where the SEA Games are set to take place, is to be the flag-bearer of the country during the opening ceremonies. The designation puts her front and center as representative of the country.

With deadly spikes, charming smile, and “heart strong” spirit, she has earned huge followers in the country. She seems half-aware of her accomplishments on the volleyball court and also outside the court. Valdez is one of the most followed volleyball players in social media, thus making her one of the sought after endorsers for sports products, gears, and drinks. She also covered on some of the famous sports and entertainment magazines in the country and appeared on television as guest in variety and talk shows or participant in game shows.

Alyssa was raised in San Juan, Batangas. She’s the only girl in a brood of four siblings. She learned how to play volleyball by playing with her two older brothers when she was in elementary school at the age of 10. She is now 21 years old and a full-time student of Ateneo de Manila University taking up AB Psychology and a member of the student council. She became popular nationwide when she started to play for the Ateneo Lady Eagles. But even after she started playing, she barely knew anything beyond the basic rules of the game and it also surprised her now of what she had become in the field of volleyball.

She is a multi-awarded athlete and is considered to be one of the best collegiate volleyball players in the Philippines today. She is a true student-athlete as she not only excels in sports but also in academics. She is currently a member of the Ateneo de Manila University’s collegiate women’s varsity volleyball team in both in door and beach volleyball. She is the opposite hitter/open spiker of the team. 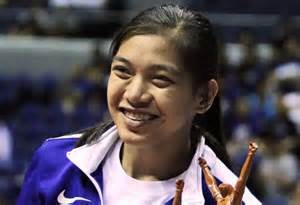 Unlike other athletes, she stays humble despite of her popularity. She just does what she loves, to play volleyball. Despite of her modesty, she has an extensive trophy collection from the championships in Philippine Volleyball games. She is grateful for her fans’ support. She makes a special effort, through little things, to let her fans know that she appreciates the time they take to cheer for her and her team. She also said, “We’re just here to play volleyball that we love.”

“Without my teammates, I wouldn’t do it. They were the ones who set it up to me.” She said. “That’s why I really love the team sports”. She also believes that there is no such thing as bad days. There are just times that you get frustrated because sometimes you can’t really do what you normally do.