Yeng Costantino the New Co-host of The Voice Kids

Newly wed, the pop rock princess Yeng Constantino-Asuncion, who brought us songs like Jeepney, Ikaw and Hawak Kamay faces another challenge in her life. Yeng is proud to take part in a reality singing competition that will showcase the passion, talent and stories of future singer of the country. She will be joining The Voice Kid Season 2 as a host together with the one of many premier hosts of the Philippines, Luiz Manzano and star-turned-host Robi Domingo. The Voice Kids Season 2 will be aired in month of June. 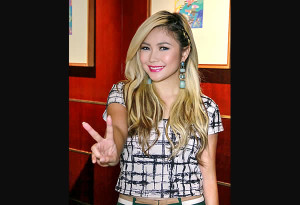 Yeng is also a product of singing contest. She was named as Grand Star Dreamer of Pinoy Dream Academy in 2006. In the year 2010 a door of opportunity opened for her. She hosted the Music Update Live in 2010 together with Tutti Caringal and Gee Canlas. Music Update Live is a late night music variety show in the Philippines which airs just before the ABS-CBN network sign off. Thus she already have some experience in hosting, however she claims it is still a learning process for her. “Pero siyempre isa sa ginawa ko is nanood ako ng past episodes, pinanood ko sila Robi, sila Alex, tinignan ko paano dini-deliver ‘yong lines”, [What I did was to watch past episodes of the show. I observed how my co-hosts Robi and Alex deliver their lines] she said in an interview.

Just like Yeng, the kids that will be joining The Voice Kids will need a combination of talent, luck and charm to get into the music industry. Her humble beginnings in Pinoy Dream Academy will certainly help her a lot in hosting The Voice Kids 2. She knows how hard it is to win, how it feels and of course the taste of victory. Yeng’s word of advice to those who are joining the show is to never give up.

Yeng will replace Toni Gonzaga’s sister Alex Gonzaga as host. Considering Alex has the favor of the viewer’s last season, Yeng naturally feels some pressure in assuming the role. In an interview, Yeng praised Alex on her personality and talent in hosting that people always love to see on her.  But as she said it, Alex will be Alex and Yeng will be Yeng. Both have great talent but different approaches in hosting. She didn’t let the pressure consume her and affect her. The support of The Voice staff boosts her confidence to do a great job on the show. 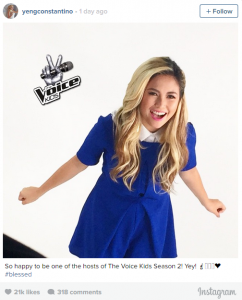 On her Instagram account she shared a photo of her which features The Voice Kids logo with the caption: “So happy to be one of the hosts of The Voice Kids Season 2! Yey! #blessed.”

While The Voice Kids still not aired yet, Yeng Constantino is busy with her new life as wife to his husband Yan Asuncion. She is a regular performer of ASAP 20 an active ambassador of rock.

The show will still have Pop Princess Sarah Geronimo, Broadway Diva Lea Salonga and Maestro of Rock Bamboo as the coaches.