Boy died after becoming wedged under an escalator handrail

A four-year-old boy in the Chinese city of Chongqing has died after becoming wedged under an escalator handrail at a subway station, report local media.
The boy was playing with the handrail unsupervised when he fell under it.The escalator did not stop until station staff switched it off. Authorities say they are investigating the incident, but also stressed the need for parental supervision.A woman died in July in Jingzhou when she fell through an escalator landing. 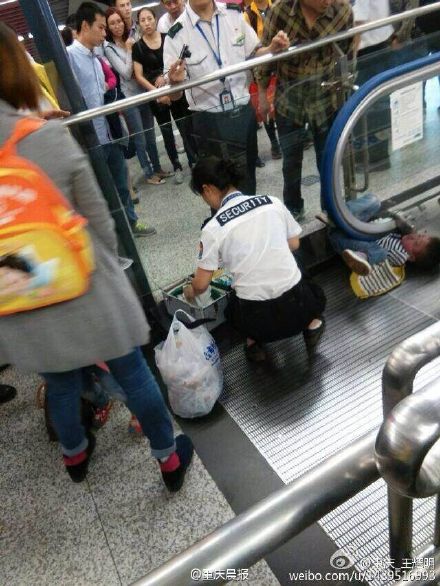 The latest incident took place on Thursday morning at Chongqing’s Hongqiaohegou subway station.Local rail authorities said that a woman had brought her four-year-old son and three-year-old daughter into the station, and left them unsupervised in the ticketing hall.The boy was playing with the handrail at a nearby escalator when he fell. His chest was wedged between the bottom of the handrail and the ground.

Subway station staff shut down the moving escalator after 20 seconds, according to local reports. They extracted the boy who later died of his injuries in hospital.

A statement by the Chongqing Rail Transport Authority on its Weibo account said they were carrying out an investigation and offering assistance to the family.

“We are deeply regretful and heartbroken over this case! We also would like to remind all passengers to look after their young children and old folks when travelling, be more alert, and avoid similar accidents!” it said.

Chinese netizens drew comparisons to a widely-publicised incident in July where a woman died after she fell through loose metal plates at an escalator landing in Jingzhou, Hubei province.

It was among a string of accidents involving escalators and lifts, and prompted nationwide safety concerns.

Many commenting online on the Chongqing incident, however, took issue with the mother and other commuters for failing to keep an eye on the children. “This time it is just the adults’ fault,” said one Weibo user.