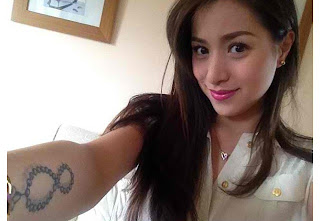 One of the loude names ever in the PH showbiz history is Cristine Reyes. From family feuds to side over side controversies, her name is really something that cannot be forgotten easily. On 2010, her getting inked also became an issue. For her, the tattoo symbolizes “God is with Me”. No one influenced her to get a tattoo, she said. Although most netizens assumed that she did that because she and her boyfriend during that time broke up. Yeng, dubbed as the Rock Princess of the Philippines, also has a tattoo she is really proud to have. Her tattoo is a feather, which she got as a birthday gift on 2015. For her, it symbolizes her thankful heart to all the people who has helped her achieve her status ow, and of course to God, who never left her side since Day 1. Yeng is the “Grand Star Dreamer” of the singing competition Pinoy Dream Academy in 2006. She has been a regular TV personality since then.