Reel or Real? Alden Richards and Yaya Dub starting to reveal true feelings for each other

Are Alden and Yaya Dub starting to fall for each other?
PHOTO CREDIT: Yaya Dub’s Unofficial Facebook page

For six weeks, Eat Bulaga’s KalyeSerye has become a worldwide sensation thanks to the main characters of the story, Bae Alden and Yaya Dub. The Philippines’ most popular loveteam, known as AlDub, continues to make everyone shiver because of their great onscreen chemistry. However, as time passes by, more and more fans have started to notice something about the viral dubsmashing couple.

While everybody is aware that Eat Bulaga’s KalyeSerye is scripted, rumors have circulated that Alden and Yaya Dub are starting to have feelings for each other.

Well, in today’s episode (which is AlDub’s sixth monthsary) of Eat Bulaga’s KalyeSerye, the hosts have started to notice the ‘thing’ going on between Alden and Yaya Dub as of late. Joey De Leon, Tito Sotto, and Ryan Agoncillo have pointed out that Yaya Dub’s kilig is already real whenever she sees Alden on screen. They have also noticed that instead of ‘Yaya Dub”, Alden has been writing the word ‘Maine’ in most of his fan signs. In case you don’t know, Yaya Dub’s real name is Maine Mendoza.

Watch the full episode below:

Joey even mentioned that Yaya Dub has been so blooming the last couple of days. While Yaya Dub continues to do several dubsmashes, it was pretty obvious that she was starting to get conscious because of what she’s hearing from the EB hosts.

“It looks like we’re the only ones who are acting here. The couple (Alden and Yaya Dub) seems to be taking this (their onscreen relationship) for real.

Lola Nidora even pointed out to Alden and Yaya Dub that they should only be acting in the KalyeSerye. She then went on to ask the former if he’s serious with Maine, which draw even louder cheers from the crowd. Alden just smiled, but it was pretty obvious that he was blushing. He then made a fan sign that says ‘Opo’ and it made Yaya Dub smile.

Before the segment ended, Joey, Jose, and Ryan gave the fans some hint that Alden has been telling them stories about Yaya Dub during rehearsals. They added that even Sam YG knew about Alden’s off-cam confessions.

So what’s the real case here? 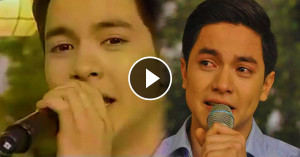 However, we don’t want you to expect too much. It could be that the episode earlier could be nothing but a gimmick by Eat Bulaga staff to add spice to the KalyeSerye. There have been rumors that the management is planning to change the loveteam’s name from AlDub to MaiDen, which is probably the reason why Alden is writing ‘Maine’ in his fan signs and the EB hosts trying to ship him and Yaya Dub.

However, it has been no secret to the public that Maine was already crushing on Alden even before she entered showbiz. However, it seems that her male counterpart is starting to have some sort of infatuation as well, and it becomes more and more obvious with each passing day..

So the question now is, will Alden and Maine take the next step towards making their relationship a reality? Both are single, so there is a possibility that they’ll be together (for real) in the future. But since everything is still a blur at this point, we just have to wait and see what will happen between Alden and Yaya Dub in the near future.

Eat Bulaga’s KalyeSerye is now more interesting than ever because of what happened in today’s episode. More fans would be glued to their TV sets every afternoon, in anticipation of what’s going to happen next.

However, we’re sure that we’ll all be waiting for Alden and Yaya Dub to answer one question.